▪Bachelor of science degree in Nursing from Australian Catholic University

▪Masters of science degree in Cardiology from Wesley hospital in Brisbane

▪She plans on pursuing a Degree in Agronomy

READ ALSO: HOW A YOUNG PIG FARMER IN CAPE TOWN IS MAKING HIS OWN FEEDS TO CUT ON COST

She is the last born in a family of 3.

In 2003, she travelled to Australia to pursue a Bachelor of science degree in Nursing from Australian Catholic University. While in Australia, she worked for 12 years as a nurse and also earned her self a Masters degree in Cardiology from Wesley hospital in Brisbane. She started working when she was 18 and raised $30,000 start up capital through savings.

In 2015, she returned to Zambia from Australia to settle. She found her father ill with an incurable disease called Alzheimer's disease,a disease that affects the brain functions. He started farming on a small scale but couldn't continue farming due to the condition.

In August 2016, Maria took over the farm and started with half a hectare of tomatoes and has expanded to over 13 hectares. From the 13 hectares she harvests between 250 and 400 boxes everyday giving her approximately daily revenue of $500 (Kr5000) at the lowest price of K50 per box.

Her farm Tuzini Farms LTD, is located in chisamba on the northern side of Lusaka.

When she started, she used to selling her tomatoes at Soweto market in Lusaka and has grown to become the major supplier of tomatoes to Freshmark(SHOPRITE) country wide , also supplies tomatoes to Ndola’s Masala market , Kitwe’s Chisokone market, which is one of the biggest markets in Zambia and also supplies her tomatoes as far as Kasumbalesa boarder post.

Tuzini Farm produces over 300 boxes of tomatoes per day.

How she gives back to the community:

▪On weekends, her workers enjoy the privileges of a literacy program at which many of them are taught how to read and write .

▪She also supports kids who are under the care of the Mwachikoka Baptist church in Lusaka.

▪She employs local youths who are on holidays from school at her farm to keep them busy and have them earn some money as they prepare to open their school .

READ ALSO: TIPS ON HOW YOU CAN MAKE A FORTUNE FROM PIG FARMING IN KENYA AND SOUTH AFRICA

Apart from being CEO at Tuzini Farms , she also serves as the

▪National Chairperson for Fruit and Vegetables under ZNFU.

Projects on her Farm:

▪She won a grant for a green house from MRI seed and has now expanded to build more green houses for the onion,cabbage,tomato seedlings.

▪She has 4 green houses for onion

When asked what are some of the major challenges she has faced as a farmer, Maria said the fluctuation in the price of tomatoes is a major challenge.

In the next 5 years, she sees herself

▪Venture into farm produce value addition by processing tomatoes and sun dried tomatoes which will be exported to the international market.

▪She sees herself impacting and empowering Zambian farmers by establishing an outgrower scheme countrywide for export,which will boost the Zambian economy

She struggles with depression and is on medication. She would like to encourage someone whose depressed, to still believe they can achieve their dreams and impact lives despite the condition.

She attributes all the glory and success which have made her the youngest commercial tomato farmer in the country in less than a year of venturing into the sector to passion, hard work and faith in GOD. She vividly remembers when she started in August 2016,she committed her plans to God and asked God to help her become the youngest commercial farmer in Zambia. Her focus was not on making money but making a difference in the lives of many through Agriculture.

"Be realistic about your Dreams. Do not be afraid to make mistakes,learn from your mistakes and look forward. Remember, to be disciplined and use the resources around you. Never give up on your dream,Never Quit. Finally, always develop your self by reading the right books, sharpening your skills and above all investing in your relationship with God"

"Do not wait for opportunities,Create the opportunities. Do everything with Passion or not at all. Work hard dream big.

She is making a difference in the Agriculture sector,what are you doing 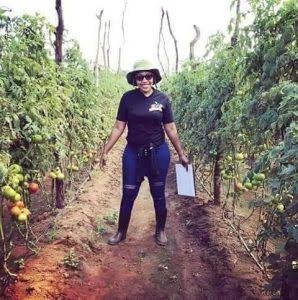 How A South Africa Farmer Is Making Profits With Nguni Cattle

List Of Affordable Cars For Nigerian Earning Below N356, 900

Why You Are Not Making Profits In Your Poultry Farming Business

Advice: Why You Are Not Making Profits In Pig Farming, Please Read This

Vital Things You Should Know About Pigs African Swine Fever

How Much Does It Cost To Raise Pigs In Africa?

Joyce From Kampala : Lessons Learnt From Chicken Farming In The Last One Year

How You Can Make Your Own Pig Feeds For Piglets ,sows And Boars At Home